It makes me really sad that I haven’t had the mental or emotional energy to write in so long. There has been A LOT going on and it will take many blog posts and many nights to really do it all justice, but here’s a short recap:

So to recap my recap…. it’s been really overwhelming the last few months, but things are turning around. And I’m getting GOATS. So there’s that.

Right now is all about talking about packing (we move in less than 2 weeks and haven’t exactly started) and debating over which kind of goats we’re going to get. Essentially the only thing my brain can handle at this point is researching different kinds of pygmy goats and how friendly each different breed is – not thinking about all the work that has to be done on the house, or the headaches I’ll have getting my new home office set-up, or all my unresolved health stuff and the fact I have to find all new doctors and specialists.

I’m focused more on the goats than the packing, because that’s way more fun. Gil also keeps threatening to eat our future pet goats, so I don’t think we’re done debating about this.

Also, I decided it would be a fabulous plan to go on the hunt for a 12 foot tall dinosaur that I could park at the end of our dirt driveway at the new house so people could ALWAYS find us, and I could say things like “Just turn left at the dinosaur.” I’d seen them in Half Moon Bay, so this past weekend my parents and I went out looking. We found it. And it was glorious. 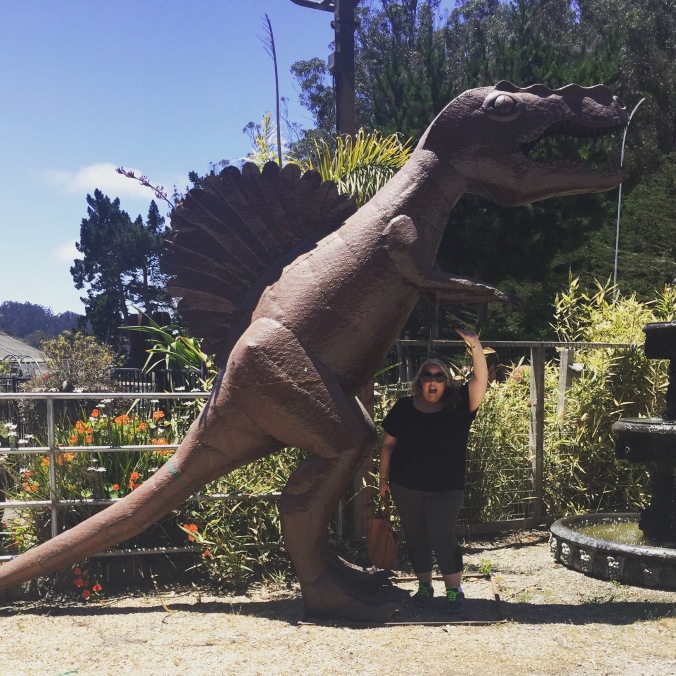 Unfortunately for me, it turns out that “glorious” comes with a hefty price tag: $3K. Considering the numbers on all that house paperwork I just signed and all the medical expenses this year so far, even I couldn’t justify that cost. Trust me, I tried. I really did. But also, I’d like to live in that house for years, and I’m not sure parking a 12 foot tall dinosaur in the road is the best way to get off on the right foot with all my new neighbors.

So I went on the hunt for something more “appropriate” – and just 100 feet into the metal gallery I was shopping in, I FOUND IT. My beautiful new rooster. Literally just a couple inches shorter than me, and as loud and obnoxious as you can imagine – it’s like my metal spirit animal.

And I checked with Gil – it’s definitely a rooster, not a chicken. I asked how you can tell the difference and he just shook his head at me. Then again, when he told me he wanted to have chickens on our property so we could have eggs, my first question was if you could just rent a rooster instead of owning one, since I didn’t want to be woken up at 5AM. Turns out chickens make eggs all on their own, without a rent-a-rooster making the rounds. I had no idea. I’m totally going to rock this whole living in the country, having a goat farm thing.

But back to my amazing find at the metal gallery.  It’s ALMOST $3K cheaper than my initial pick, so it would be really irresponsible for me NOT to buy it. Because not having some sort of animal statue at the end of the drive just really isn’t an option. PLUS, now I can tell people to turn left AT THE GIANT COCK.

I couldn’t fit it in my car, so he’s not actually mine yet, but he will be. Gil agreed to go get him for me (it’s about 45 minutes away) with his truck and then bring him back to pack him into the moving truck we’re renting. Forget engagement rings – THAT is true love.

So basically I’m living exactly the life I want right now – where transporting a 5 foot tall metal rooster is my number one priority, and the only thing I’m allowing myself to stress about is what I’m going to name him.

Considering the year I’ve had so far, everything else can just wait.