Turns out, when you’re recovering from major ankle surgery (my second, on the same ankle, thankyouverymuch), you aren’t really in the mood to write or blog. Or sit up. Or talk to people. Or pretty much anything else. Well, for the first few days at least.

After that, there isn’t as much of an excuse, since the pain was managed 1000 percent better this time around, and I wasn’t nearly as high on painkillers. Which in some ways is disappointing, because there were some GEMS that came out of my mouth last time when I was all hopped up. Two quick examples just for giggles: 1. I told my mom I was growing out my bush, and 2. I growled repeatedly on the phone to the person I was dating at the time, and then laughed hysterically as if it was the best joke I’d ever told.

None of that this time around. Which I guess I should be grateful for, since I live with my boyfriend now and I’m not sure I trust my Percocet-addled brain not to instruct my mouth to say something potentially detrimental or wildly embarrassing. So on that front, we’re good.

It’s been about 2 weeks since surgery, and I’m doing really well – but my aspirations of writing some of my most hysterical and pithy blog posts while on painkillers turned out to just be a fantasy. Oh well. I have something new to write about now anyway. Relationship tests. 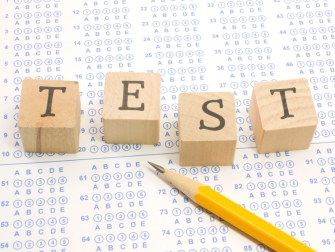 No, not pen and paper or fill-in-the-bubble tests. Although side-note, remember Scantron forms?? And the stress of making sure you had the right kind of pencil? #2? How many numbers of pencils are there? Is my sparkly mechanical pencil a #2?? No, not those kind of tests.

And not those stupid “tests” men and women sometimes like to throw out early on in the relationship either; because no you CANNOT judge me based on what I order on the first date, whether it’s a salad or a burger so rare that it’s still mooing. Or if I’ll sit through a Sunday of football without complaining or just walking away (I won’t). Or if he remembers that obscure flower you love that you happened to mention in passing on the first date (he won’t).

No, I’m talking about real tests of a relationship – moments in time when you face an obstacle you weren’t expecting, and how you cope/communicate/handle it together speaks volumes about the relationship. Depending on the magnitude of these tests and obstacles, some relationships are still standing on the other side – some aren’t.

Well, when I scheduled this surgery, I inadvertently scheduled a relationship test on the side. SWELL. I don’t think I can use my doctor’s note to get out of this one. Nope, not when the surgery in question basically renders me useless for a full 6 weeks. 6 weeks of being completely non weight-bearing and rolling around on a little scooter/walker. I can’t really carry things. Or do stairs. Or get in and out of a car easily. Or run back into the bedroom to grab my phone. Or get comfortable to sleep. Or get comfortable at all, really. I’m on my back most of the time with my legs up, and not in the fun way I prefer to be. Speaking of which, I almost forgot. I also can’t really have sex easily either, at least until the stitches come out.

Now, I know it will get better. We’re only in week 2, and the first couple weeks are the worst, with instructions to basically lay around and have my foot up and iced pretty much constantly. Lay and ice. Pee. Lay and ice. Pee. Lay and ice. I’ll get the stitches out soon, and that will make a big difference. But for another month, I still won’t be able to put any weight on it for fear of snapping the giant metal screw that is holding everything precariously together right now. So that means another month of still needing to ask for help with the most basic things and I can tell you right now it gets old. On both sides, I imagine. It sucks.

But I am choosing to look at this little relationship test as a growth experience. A way for us to grow and learn more about each other. I sound so zen, don’t I? Well, I wasn’t a week ago when we were ready to tear each other’s heads off, and seemed to find something to fight about every single night. 750 square feet starts to feel pretty small then, especially when one of you physically CAN’T leave, and the other one can’t leave without being a jerk who abandoned the crippled girl just days after surgery (sorry dude).

So if you’re not ready to talk, you stew. You stew in 750 square feet, and you feel trapped. Which is what we both did, for awhile. Until we couldn’t take it anymore. And then we talked. And really tried to listen to each other.

Which is really the key to every successful relationship. That and sex. But at that point in time, only one of those things was physically an option, so we opted to talk. And I’m so glad we did. We talked for a long time that night. And the night after that. There was some real truth being served, from both sides and I think we both needed to hear it.

We learned a lot about each other, and how the other deals with different situations. How we each react to stress and what we need from each other in those moments. I mean after all, we’ve only known each other a little more than a year. Long enough to know we want to be together, but not long enough to unearth every nuance of each other’s personality. Especially under atypical circumstances. So this really did turn out to be a great learning experience for us, and I’m actually grateful for that.

I’m not saying we aren’t ever going to fight again – we will. But we can walk (or roll…. or hobble) away from this experience knowing we have the right freaking pencil to pass the test – we know how to talk through these hurdles and really try to see things from each other’s perspective. We’ll have to remind each other of these things at different points for the rest of our lives because we’re human, but that’s what interpersonal communication is all about.

Oh, and when you’re all talked out, I’m happy to report that a little creative positioning on the edge of the bed and a concerted effort not to bust your stitches can get you the other half of that equation we all need to get through a rough couple days with your honey. <sighs happily>