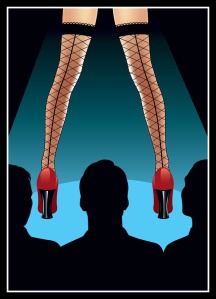 Normally when your boyfriend tells you he was almost kicked out of a strip club, one might become alarmed. Angry even. What kind of behavior would it take to get booted from one of the most notoriously trashy strip clubs in the Bay Area? Groping? Harassing of the strippers? Fighting? Public urination??

The boyfriend in question is mine, and this conversation happened just a couple weeks ago. It all started when he was organizing a bachelor party for one of his friends. A low-key affair involving a day of shooting followed by dinner and beers. I’d asked if they were going to go to a strip club, and he told me no, that wasn’t really the groom’s style. Not that I particularly care – I am not one of those women who finds strip clubs offensive. I think it’s all in good fun and if you can’t trust your man at a strip club, your relationship has bigger problems than the implants swinging in his face. Plus, Gil happens to have a debilitating aversion to glitter and lotion – a stripper is basically walking kryptonite to him.

But, in a rather unsurprising turn of events, after a few rounds of drinks, they decided to pile into a couple cabs and head over to the only strip club any of them knew in the area. This place has been around for decades, is practically falling apart, and calling their strippers the B-team is wildly generous. Since it’s full nude, they don’t serve alcohol there and I can just imagine him essentially pouting in a sea of breasts. He winds up paying for the groom’s lap dance and settles in to kill time by playing pinball on his phone while the strippers do their thing on stage. Yes. That is what I said. HE STARTS PLAYING PINBALL ON HIS PHONE IN THE MIDDLE OF A STRIP CLUB. I think I fell in love with him a little more when I heard that.

One of the strippers (I’m going to imagine her stage name was Karma) must have seen this happening and decided to take matters into her own hands – literally. As he described it to me, he was sitting to the side of the stage, minding his own business and was rocking an epic game of pinball. You have to understand, he lives and breathes video games and arcade games. He actually got me to sit through a documentary on arcade game competition once. And one of the items on his bucket list is to own a pinball machine. But I digress. Where was I? Ah, the stripper. As he’s about to unlock some high level or key or whatever (I try to listen, but some of these things don’t stick) a “beefy paw comes out of nowhere and grabs my fucking phone!”

Karma, in a cloud of lotion and glitter, offended he wasn’t paying attention to her seductive C-section scar and fake tits, stomps over to remove his “distraction” from the show. As he whips up to confront his pinball attacker, he sees it’s one of the strippers. And he almost wages a full on battle with her, seeing as how she ruined the game for him and  probably got glittery lotion on the screen of his phone. And I have to assume if she hadn’t immediately returned the phone, he really would have made a scene. He told me later how much of a concerted effort it was not to lose his shit, but at that point he was already on the bouncers’ radar.

Fast forward to me receiving a text from my boyfriend asking for a ride home from a strip club, explaining to me how he almost got kicked out. Because he’d rather play pinball than play with strippers.